Here’s the second half of How to Cross the Flaming Chasm of Zlork, with captions explaining the simple method of crossing. 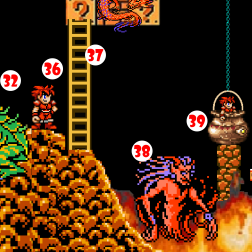 Hero (36), still coated with sticky frog guts, makes easy target trying to escape on Ladder (37). He is snatched up by hungry Fire Elemental (38), who pops him into a Cauldron of Alphabet Soup (39).

Gremlin’s Balloon bumps against Spikes (44) and bursts, dropping Gremlin onto tail of Sleeping Dragon (45) Dragon wakes up hungry just as Cauldron containing delicious-smelling soup and Hero rises past. Dragon tries to grab Cauldron, but clumsily jostles it due to sleep-sand in eyes, upsetting Hero from Cauldron. 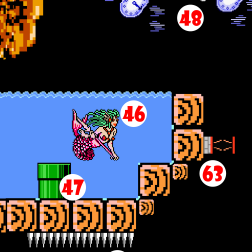 Meanwhile Mermaid (46), hearing retching noises as Bullet Bill (26) spits out Zombie Head (28), is reminded that it is time to clean out her smelly Pantry (47).

In Pantry she finds old Fish Bones and tosses them out of her house. Fish Bones (48) pass through Time Warp (49) and emerge as Youthful Pufferfish (50). 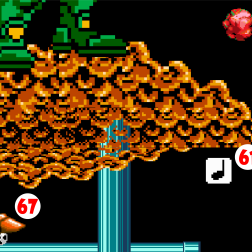 Pufferfish (50) smacks into leg of Giant (51), pricking him. Startled Giant drops his Marbles into Flaming Chasm of Zlork.

Meanwhile, Hero falls out of Cauldron of Alphabet Soup and lands on uprising platform set into motion by falling Green Marble. Impact of Green Marble on left-hand platforms dislodges Landmine (56), which falls into Flaming Chasm and explodes, startling 3-Headed Snake.

In his confusion, 3-Headed Snake bites himself and keels over, poisoned, onto Swivel Platform (57).

A Coal Elemental (58) drops from a Conveyor Belt at the same moment, and the impact of his greater weight catapults the 3-Headed Snake up and across the Chasm, where he lands on a Giant Mushroom (59).

Meanwhile the Orange Marble (60) emerges from the Pipes and sails upward, striking a Music Block (61), which rings with a beautiful tone. 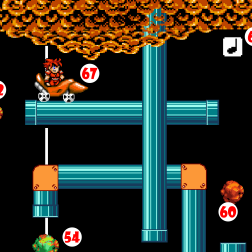 A second later, the Red Marble (62) flies from a different Pipe, rebounds against a Springboard (63), and flies back through the Pipe it emerged from, striking a different Music Block (64) and eliciting a different tone.

Absent-Minded Wizard (65), hearing musical tones and thinking his doorbell is ringing, opens Door To Nowhere (66) and falls from his deck onto the Giant Mushroom, next to the 3-Headed Snake. 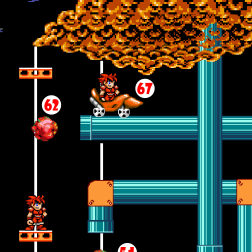 Meanwhile Hero is carried upward by the Elevator Platform, eventually leaping off just before the roof of the Chasm. He lands in a Giant Rollerskate (67), which rolls along the Pipe and pitches him over the edge.

Hero leaps free just in time to land on a stone ledge next to the Chasm Control Center (68). 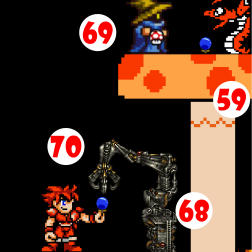 Meanwhile Absent-Minded Wizard takes pity on poisoned 3-Headed Snake and administers Purgative Medicine (69). 3-Headed Snake coughs up Control Orb, which it had previously swallowed mistaking it for an egg.

Control Orb rolls off of Giant Mushroom and into hand of Hero, who installs it in Chasm Control Center (70). Now in full command of machinery of Chasm, Hero reverses direction of Conveyor Belt and leaps down to ride out of the Chasm. Coal Elementals, normally brutish and violent, notice letters C-A-R-B-O-N stuck to Hero’s chest from his journey in Cauldron of Alphabet Soup and mistake Hero for an incarnation of their god. They fall down and worship Hero, conveying him safely out of THE FLAMING CHASM OF ZLORK.